Mind where you bore!

With renewable energies on the up and up, geothermal heating is becoming increasingly popular. An ardent supporter of sustainable development, CERN welcomes this trend, even though it has certain risks for the Laboratory.

An ever-growing number of people in Switzerland and France are switching to geothermal heating, with the result that more and more bore holes are being sunk for geothermal probes. Since, on average, such bore holes go down to depths of 100 m, they can have an impact on CERN’s underground facilities, which are also located at approximately that depth.
In the Canton of Geneva, all bore holes, whatever their depth, are subject to planning permission. Applications for planning permission are approved – or refused – only after consultation with the Geology service of the État de Genève (GESDEC). In France, only bore holes deeper than 100 m require planning permission. Bore holes to lesser depths simply need to be declared to the Direction régionale de l'environnement, de l'aménagement et du logement (DREAL) and a Déclaration d'intention de commencement de travaux (DICT) needs to be submitted. In theory, anyway. In practice, 80% of all bore holes are never actually declared.

The dangers of unauthorised borings
Youri Robert, who is in charge of CERN’s site information (SMB-SE-DOP), warns: “Undeclared geothermal bore holes represent a real hazard for our underground structures. The most obvious risk is that of simply drilling into one of the facilities, but a bore hole that passes within a few metres of a structure could have equally dire consequences, because the vibrations can affect the highly sensitive equipment in the accelerators.” But how can you be certain of where the LHC passes and whether your house is on top of it or not? Not to mention the fact that - on top of these uncertainties as to location above the ground - a vertical boring of 100 metres can deviate by up to 30 metres!
Bore holes can also trigger geological phenomena that can be damaging for the tunnels, such as rock fractures, merging of pockets of water, and water or mud percolation. Michael Poehler, Head of the Design Office and Patrimony Section (SMB-SE-DOP), adds: “We have enlisted the services of university laboratories and design offices specialising in geotechnics to obtain an accurate picture of the direct and indirect risks associated with bore holes. This has enabled us to define reasonable no-bore zones around our underground structures, so it is strictly forbidden to bore holes within 50 m either side of the tunnels, and authorisation is required for boring in the area between 50 and 100 metres either side of the tunnels.”

Mapping what lies beneath
A map showing the no-bore zones has finally been drawn up in collaboration with the Pays de Gex Communauté des communes and the GESDEC. 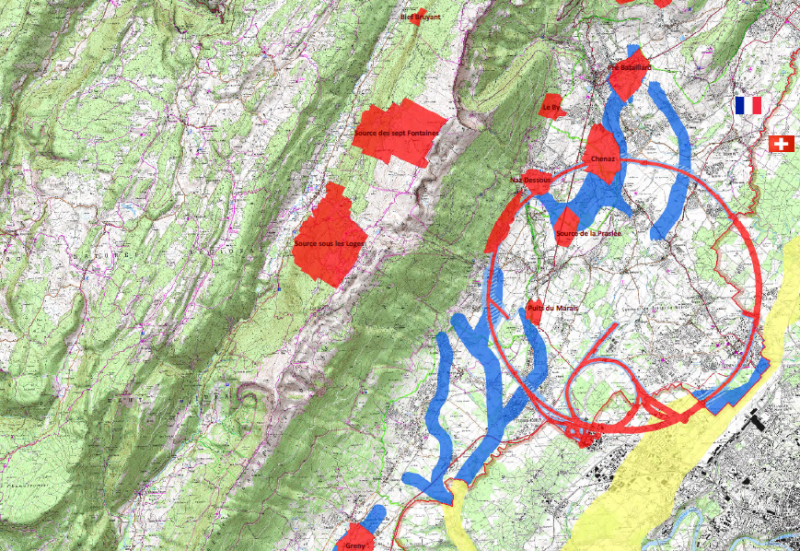 Click on the image above to see the full map

The map also shows the groundwater protection zones, which are similarly out of bounds for boring. The map has been sent to all communes in the Pays de Gex, to the DREAL and the BRGM (Bureau de recherches géologiques et minières), to Geneva’s local authorities and to the region's boring contractors, and should avert any incidents.
Looking further ahead, shale-gas exploration in this region would present problems on a completely different scale. In anticipation, studies are currently under way to determine the potential impact of hydraulic fracturing techniques and define safe distances to be respected. Watch this space.

For more information on the areas where boring is forbidden, and to download the maps for each commune, go to the DREAL Rhône-Alpes website.